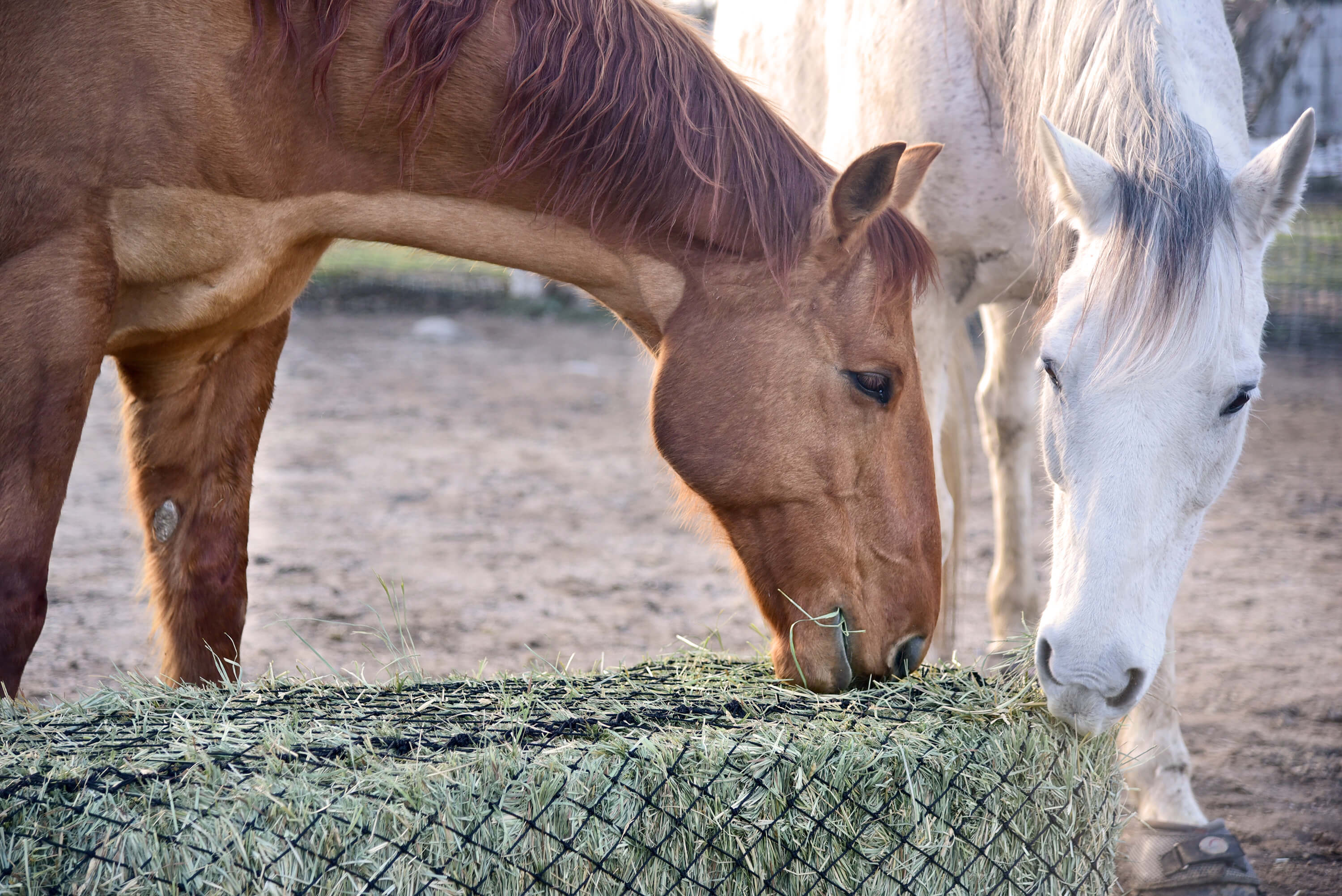 At my previous location, I had the horses set up with their own slow-feeders and it was a perfect system! I loved the feeders for the ease of filling, and how they kept hay off the ground. At our current location, however, the noise they made by kicking the feeders as they ate caused a problem. So, we switched to a hay net!

I looked at different hay net options, and decided to reach out to Hay Chix to select the perfect net for our needs (You can get 20% if you go through this link). I can't get out everyday, and need to fill the nets myself. The horses get alfalfa fed loose twice a day, but if I want them to have 24/7 access to grass hay I need to supply it myself. Because of this, I wanted to be able to feed an entire bale at once. Hay Chix had a hay net for this purpose! I went with a smaller hole opening, since Trubee is such an aggressive eater. I hope that he regulates his eating, and in time eats only what he needs. But for starters, he definitely will be gorging himself.

I also don't know how durable the net will be! Trubee paws at it, and Tucker will start as well I'm sure. They will probably drag the net all over the place, so I'll need to see if that is a problem. I also don't know how empty it needs to be before I refill it, or how many days a bale will last them. But if this works and they can have grass hay whenever they want, I will be so happy!

The Road to Self-Regulation

Here is what the net looked like after the first 20 hours! I have a feeling Trubee is hitting it hard - but when I was there, they both were happy to ignore the hay and hangout with me which was great.

After finding the hay net was dragged from one spot to another on the 3rd day, dangerously close to where they pee, I decided to try tying the net to a post! I think this will be the preferred way. The first bale lasted 3 days.

The 2nd bale still has a lot left after 3 days! Hopefully they have reached some peace with the fact that the hay is sticking around for awhile 😉

I wrote this post on February 23rd, and today is June 28th and this hay net is still going strong! 💪 I fill it twice a week with grass hay, and hopefully soon I'll be able to get a less yummy hay that will last them longer! They eat the current hay at a bit faster rate than I'd prefer, given they also get fed alfalfa twice a day and some Stable Mix still...🤣

For awhile I was able to get them Timothy Grass, which they didn't like as much so they actually grazed it and it would last up to 5 days...but I've only been able to get an Orchard Meadow mix lately, which they adore. It was interesting to see how much more they ate of the Timothy during a crazy stormy spell of weather we had! Horses eat to stay warm, and also when bored (I can relate) so when staying under cover during rain, their intake greatly increased.

The net itself performs admirably and I tie it to the fence in their shelter so they don't drag it into their pee. It also means the hay they drop lands on stall mats, and they can eat more of it so it reduces waste even more! I am able to back my truck right up to their shelter and slide the hay bale into the net just like in the video above, and drop it off the tailgate right where I tie it so everything is super easy!🎉

A year later and my hay net is still going strong, it has traveled many times, and it is still my FAVORITE way to offer 24/7 forage for my horses! I can't get over how convenient it is to simply slide in an entire bale, and not worry about it for several days. Once we were able to get Teff hay, one bale was lasting around 5 days or more - pretty awesome! It is also good to know they are grazing vs chowing down on hay - exactly the intention with free-feeding hay!