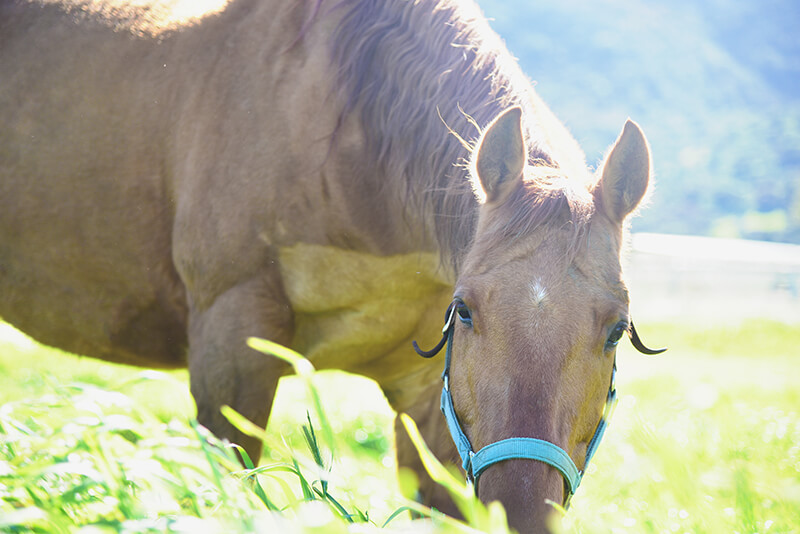 The well-being of my horses is the most important responsibility of my life. Well, perhaps it is among the most important, but sometimes the stress of figuring out what to feed them can make it seem that way! I am so thankful that I've again solved their need for forage (updated blog on forage here), and so grateful that I have been confident in their nutrition while figuring that out thanks to Horseshine. (2022 update + coupon at the bottom!)

I've always enjoyed browsing catalogs of equine supplements, testing different brands here and there for my horses. While studying for my Animal Science degree, I got to learn a lot more about the science behind supplementing a horse's diet, and feeding horses in general! For awhile, I actually planned on going into the field of equine nutrition, but changed my mind when I realized what I would actually be spending my time doing.... 😉

When allowed to graze naturally, horses can consume nearly all of the nutrients that they require from the plants they graze on. Of course, this requires a lot of space, which most of us simply don't have in today's world. Instead, our horses are given hay. Hay is filled with protein, fiber, and varying levels of vitamins and minerals - but it lacks most of the omega 3's that it once had when it was in its grass form.

There are two types of fatty acids that horses utilize from fresh grass, omega 3's and omega 6's. If the ratio of omega 6's gets too high, negative side effects such as inflammation are known to occur. Grass has a higher ratio of omega 3's to omega 6's, making it a perfect balance. Now, there are lots of different omega 3 fatty acids out there. But there is just one that horses cannot produce, and therefore need to consume. Alpha Linolenic Acid (ALA) can be converted into two other omega 3's once the horse has it available. You will find the best source to supplement this is flaxseed, as with a ratio of almost 4:1 of omega 3's to omega 6's it closely mimics fresh grass.

I started feeding Horseshine last year (2018) when I had to move my horses from grass pasture. This is a very economical flaxseed supplement, but more importantly it is a top quality supplement. And perhaps most important - the horses LOVE it. After speaking with the president of the company about the thoughtfulness that goes into the milling of the product to achieve maximum nutrient value, I was confident that the supplement would be a beneficial addition to their diet. Tucker at the time was struggling a ton with weight loss, and had started to have diarrhea the week before I introduced Horseshine. Within one day of feeding his first dose there was an improvement in his manure. After a couple of days, everything was back to normal.
I then added more pelleted feed to his diet to add more calories, but I don't think I would have seen such dramatic results if not for the flaxseed supplement! He gained so much weight the first week of receiving both! The biggest difference that I noticed other than the weight gain was how much more energy he had on the trails after a week or so of having Horseshine every day.

I have continued to feed Horseshine since last year, and I don't think I'll ever stop. We have since moved locations, (and by 2022 they have moved many more times), and it was comforting knowing they had Horseshine during the transitions. Their winter coats are very different than they have been in the past! They are thicker instead of longer, and they aren't shedding as much as they normally would at this time. Trubee has had zero skin issues, and normally he has something weird happen every winter (*knocks on wood*). Tucker isn't receiving nearly as much feed as he was before, and is maintaining perfect weight!

Did I mention that they love this supplement? Tucker will empty his bowl of food if the Horseshine is underneath. I have to feed it to him separate from the the pellets because he wants, needs, to eat the Horseshine first. It is wonderful for easy keepers - if I don't want to feed Trubee the extra calories, I can just toss in the supplement by itself. We also use the treat version of this supplement, Omega Nibblers Low Sugar & Starch, on a daily basis. If we have a treat-heavy training day, I can skip their Horseshine dose, as 15 of these guys is equivalent to the serving of 1/2 cup!

Popping back in on this post to update on the horse's health and use of Omega Horseshine! It is now 2022, and they horses have been thriving on this supplement. Prior to Horseshine, Tucker had a sarcoid on his chest that was continually growing. It was nasty in the summer, keeping flies off it was challenging! We started Horseshine right before winter, and the next spring when he shed his winter coat...I noticed the sarcoid cleared! It was simply gone, both visibly and to the touch - the thickness and lumps under the skin had vanished too. The only time the sarcoid reappeared was in 2021, when I took a 1 month break from Horseshine to test a competitor product (which also included a flax base). It came back just slightly, exactly like how it looked in the 2015 photo. We resumed Horseshine, and it was gone within a few weeks. I don't think I need more proof than that 🙂

But in case you do - Tucker turns 20 this year, and feels incredible! Trubee has not had any episodes of itching, rashes, or other strange skin ailments that he use to have annually. Both play and have the energy levels of horses 10 years younger, and we still ride and do challenging trail rides regularly. Omega Horseshine has a place forever in our feed program!

We have a coupon for 10% off your purchase on the OmegaFields.com website: NANTUCKET. The code excludes rice bran, subscriptions, and bundle packs - but is perfect if you would like to try a bag of Horseshine to see what you think! The larger bags are obviously the best deal, and I would recommend giving it at least two months if not three months to see all the benefits in your horse. If you're hoping for an improved hoof, you will want to give it a full year! Both the original and Complete versions will work, choosing between the two will just depend on the rest of your horse's diet. Usually, the original Horseshine is all you'll need!