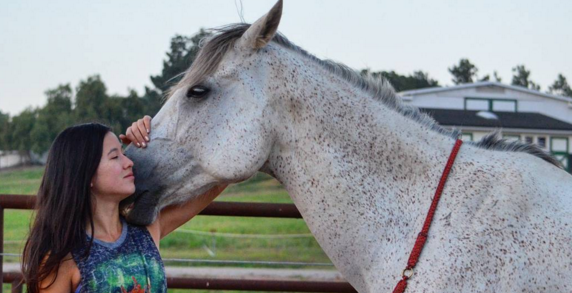 My life truly began at my first horse camp as a young girl. I never thought that I would be able to have a horse to call my own until I was old and grown up! One day, my dream horse arrived at the ranch where I rode. His name was Tucker. 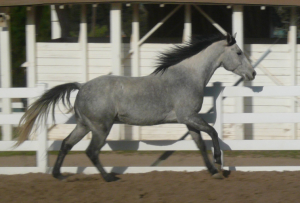 The owner was a young man who brought him here from Connecticut. I believe this man truly loved Tucker, and he let me ride Tucker once when the horse I looked after was lame. Tucker had only ever had one other person on him for a pony ride before his owner had me try him out. When I rode him, he was responsive but fast. I was told to check him every few steps because he would break into a canter. I still remember that ride, I was so happy to have had the chance to ride my dream horse.

A year or so later, his owner left him there for some reason and ignored all attempts at communication. I'm still not sure why, though I contacted him a few years later to ask if he had any paperwork on Tucker and he told me more about his youth. Apparently he found Tucker as a yearling in the newspaper. Tucker had been fox hunting on the East Coast, and primarily been schooled in dressage, though this story did not correlate with the story he had told me in person when he first arrived with Tucker. Too scared to ask why he left him, and strangely aware that he seemed completely unsurprised that I had acquired his horse, our conversation ended with a sense of conclusion but without many answers.

Tucker waited 6 months in a back pen for his owner to come back. While he did receive hay and water and the ranch hand brought him into a stall when it rained heavily, Tucker was left alone and otherwise untouched and forgotten. The ranch owner decided that she could not keep him on her property any longer, and planned to drop him off at an auction. She asked if I could retrieve him from his lower pen and bring him up to a stall by her house so she would remember and be able to easily load him in the trailer. She said I could mess around with him until she had time to bring him to the auction.

Excited, I set out to bring him up. It was the most stressful walk of my life, leading this insane young horse that was overjoyed that he was out of his pen. I thought he was going to kill me, he was prancing all over and leaping at the slightest thing. He had no idea how to walk in a straight line, so whether he was trying to avoid crashing into me or not I'm not sure he would have been able to avoid it. He stepped on me numerous times and by the time we made it up to the stall I was putting him in, I was exhausted. Nostrils flaring, Tucker was screaming for his friend, Little Star, who we had passed on the way up.  (They had lived together before he was abandoned, but were separated because they played too rough and were getting too many bites from each other.) I shut his gate and thought that I had been mistaken about my fantasy that we would have a magical connection and ride off into the sunset, or whatever a 14 year old girl imagines. 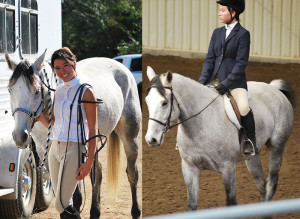 I was going to be at the ranch again the next day anyway, so I still went up and took Tucker out. We went straight to the round pen, which was not far from his stall. It was not the same horse I had brought up the day before, this new horse was calm and gentle, though still unable to walk without running into me. I was surprised, and pleased, and excited again. We did some free lunging in the round pen, and he responded to all the voice commands I had learned from his previous owner. I don't know what I was thinking, but my mom and sister were there and I asked my sister to retrieve my helmet. I had only a blue rope halter, no saddle, and I was going to get on.

Things could not have gone more smoothly, and our first ride was wonderful. We walked, trotted, and cantered both directions as well as stopped and backed up. He was perfect, and my mom watched with a look of slight regret and pride at this accomplishment. My parents started paying his board, so I could keep riding Tucker during the summer horse camps that I worked. I didn't put a saddle on him for at least a month, maybe longer, fearing it would scare him or something. We rode all around with my friends, and the ranch owner was already referring to him as my horse. He was the most beautiful horse I could have asked for and I was the only one who worked with him, it was all I had ever wanted.

It was a challenging journey, as he was very green with only a few months under saddle. He could barely walk in hand, and had no ground manners. He would bite, run away, and was generally wild at times. But he was also loving, and grateful, and in every way worth it. We clicked, and with endless different training methods to pull from, we accomplished a solid relationship based on trust and love. The first time I had his feet trimmed, the farrier was amazed at his transformation. He had done his hooves when he was in the hands of his first owner, and said that he was crazy and nearly dangerous. When I held him for the farrier, he put his head in my arms to cover his eyes and I held him as he stood there quietly. A year after we started our journey, Tucker worked with me in the horse camps as a camp horse. He always became a favorite, trumping the old favorites due to his calm, safe behavior but large, "big-kid" size. People couldn't believe how good he was with the kids. To this day, Tucker loves young children.

Over a year later, my parents "bought" him so that he was officially mine. We paid off half the board from the 6 months that he was abandoned, a fair trade for the piece of paper that would keep him safely with me forever. For $600 I had my dream horse, whose name on the abandoned board contract had read Nantucket Blue. From gymkhana to jumpers, trail riding to tricks, cows to dressage, we've dabbled in all disciplines. Today our focus is purely on our relationship and whatever it is we both want to do. Mostly, Tucker prefers bridleless riding, trick training, and above all else, trail riding. Incorporating the clicker into his normal play time has increased his motivation to learn new things dramatically, and we're always learning new ways to do things!

Some fetch awhile ago!