Part of the dream of horses is sharing a dance with them. A beautiful step towards this dance is the twirl, which can be done in both directions using the human's spin as the cue for the horse's spin. It is a great exercise for reading body language and developing greater communication between horse and human, not to mention it's just plain fun! All our horses absolutely love spinning, and will throw in spins at random if you let them.

Okay, so first step you will want to ensure is that your horse is completely comfortable with you all up in his butt space. Yes, I mean completely comfortable with you approaching from behind, bumping, walking back and forth, etc. You will essentially be teaching your horse to turn and place themselves in the perfect kicking position, so you do not want them to turn and realize they are uncomfortable and decide to defend themselves. Know your horse! If they are likely to kick, do not teach this trick.

Next you will have to decide how you want to teach your horse the maneuver. It can be taught plenty of different ways I'm sure, but so far with our horses we have encountered just a few. The method you choose will depend on your horse's personality and learning style, so this is something only you can evaluate. Of course, there is always a lot of trial and error so don't be afraid to test the waters with various methods. The methods below are titled by the horse they were taught by:

Tucker's style is likely going to be the less likely to work for you. He knew how to sidestep away just from body cues when I decided that I wanted to teach him to spin. I was puzzled how to go about this with him, and as we were sidestepping I let myself think about it and lose focus of the present. At that moment, Tucker did a spin. Tada! He then knew how to spin. Now, I did have to perfect it quite a bit after that first one. He would get sidestepping cues mixed up with spinning, and would sometimes not complete the spin. In the beginning I rewarded him for partial spins, but gradually worked up to only rewarding compete spins. We had to start from scratch to learn spinning in the other direction, but he caught on to that very quickly. I then simply transferred the cue to my arm motioning the spin, then by cueing and spinning myself I transferred the cue to me spinning. -R

Trubee learns some things solely from watching his brother. However, with spinning he just couldn't quite get it (he would see Tucker, then he'd copy Tucker, then suddenly he couldn't see Tucker anymore so he'd stop mid-spin). I had to figure out how to teach him in a non-offensive way, since he is quite sensitive and will become rebellious after getting frustrated. I did this by having him back up a couple steps, then I would quickly and swiftly back up faster than him and move behind him to his other side. I would then call him to me so that he turned around to follow me backwards, causing him to spin. This was extremely challenging for him to understand, and he would typically forget from one session to the next. I found that holding my dressage whip in my hand and using it to tap his neck like a neck rein to turn him helped for the first couple of spins! Now, this method can be quite dangerous if you do not know your horse well. You will literally step right behind them, and if you are not careful to read their body language you could get yourself into a bad situation. So, please be careful. -R

Carly is the type of horse that needs a very structured learning environment. I tried in a similar method as Trubee's method, but she got flustered and annoyed that she didn't know what I was saying. So, I put a halter on her and used her long lead rope. I draped the lead rope around her bum, cued her, and tugged lightly on the lead rope. She came around following the rope, and I clicked and rewarded. I cued her by using either a stick/dressage whip, or my arm, and waving her around in the direction of the spin. After we did that a few times, she started automatically following me when I would walk behind her. At this point, I would toss the rope over her back, walk around her face to the other side, and then lower the rope around her bum. She picked this transition up quickly, and was soon doing it when I cued and tugged slightly on the rope over her back instead of her bum. Eventually, I would toss it over her back, cue, and she would spin. At that point, we began trying it at liberty, putting the halter back on if she began to feel flustered. This method is the one demonstrated in the video on Moxie. - L

Moxie literally learned by watching Carly spin, realizing Carly was getting a treat when she spun, and wanting a treat of her own. Sorry that couldn't be more helpful haha but it is interesting to keep in mind that if you end up working with multiple horses, don't forget that you can utilize the skills of your more seasoned horse to help model for your younger horses. - L 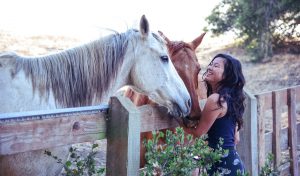 How to Improve Your Relationship with Your Horse 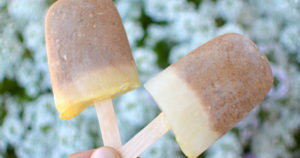