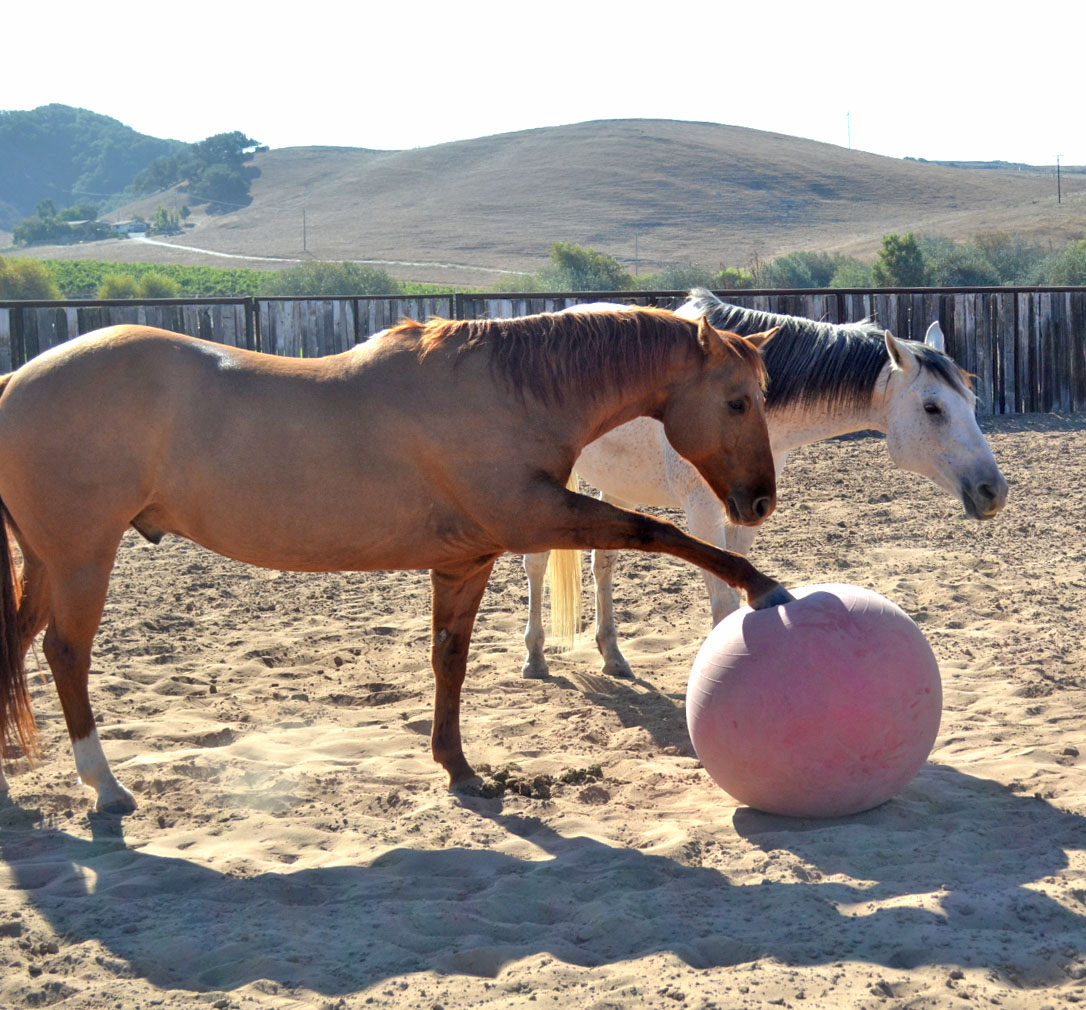 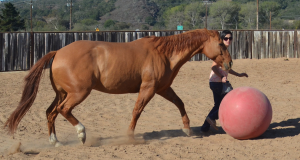 Some horses love playing much more than others. Trubee is one of those horses. Other horses don't really like to play, but love having goals and accomplishing them. Tucker is one of those horses. Then there are horses that are somewhere in between, such as Moxie. So, how does one find a game that engages both types of horses both mentally and physically? How about a ball!

The ball is a great activity for horses. Not only will it be fun, but it helps get them use to accepting random occurrences while remaining calm and focused.  In other words, it helps the horse expect the unexpected, sometimes referred to as "desensitizing". Balls bounce, roll and take random turns according to the surface it rolls on. What a strange, monstrous being this mysterious round object must look like to the horse! Tucker, for one, was terrified of the ball at first. 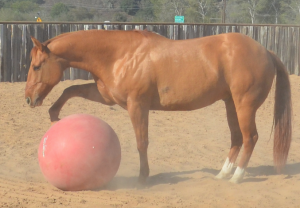 And I mean just mortified. Luckily, he had his trusty, typical Quarter Horse brother who is curious about everything to check out the monster for him.  Trubee hardly even hesitated to approach the ball, and immediately decided that he should paw it. Then when Tucker was brave enough to come over and look at it, Trubee thought it would be a great idea to kick it right at him! He still does that, but Tucker doesn't run anymore.

Trubee pretty much immediately was able to learn how to follow the ball, and touch the ball when asked. Tucker on the other hand took a few sessions with the ball to consistently be brave enough to even touch it with his nose. The clicker helped tremendously in this situation! Tucker gets a click every time he touches the ball. He has now progressed so much that he will actually roll the ball with his nose, and allow it to be bounced around him, off of him, under him and rolled up onto his back. The ball still makes him wary, but he also loves facing his fear and being rewarded! 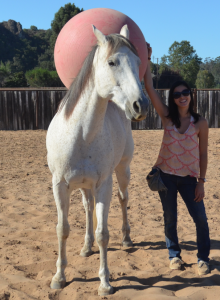 This last weekend, Tucker was a little foot sore after a trim. He didn't really want to leave the softest corner of the arena, so we brought out the ball. Instantly his eyes lit up and he approached the ball! He forgot about his demand for babying and instead engaged in a great play session with the ball. Every time he touched the ball, he would receive a click, and for every really nice roll he would receive a click and a treat. Clicking consistently is so important to keep them engaged, and strategically timed rewards make all the difference in their eagerness to learn or improve. When doing crazy things with the ball like bouncing or rolling it towards them, click as soon as the ball starts moving and the horse remains still. You have to develop a feel for the appropriate times to click in this situation, as it is good to click again just a couple of seconds after if they remain still. Doing so reassures them that you are in fact paying attention and what they are doing is correct and good. 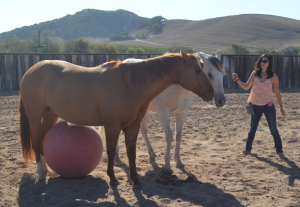 Tucker and Trubee will even stand next to each other and allow the ball to be rolled underneath them! Sort of like, horse bowling. Except the object is to not knock their legs down? Maybe more like making a soccer goal. In any case, it is actually a lot of fun for the human. The horses are okay with it too 😉

Bouncing the ball hard enough so that it bounces higher than the horse's head is an incredible trust exercise. Because lets me honest, that is just plain unnatural for something to do. But it is pretty fun! Again, click when the ball bounces and the horse remains still. 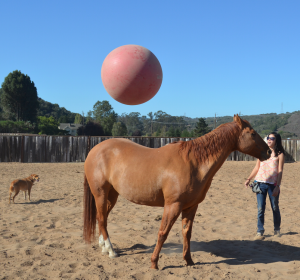 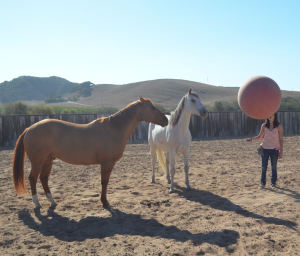 Below is the ball that Tucker & Trubee have! Its quite durable, I would probably recommend getting a cover for it but so far this naked ball has held up fine! The colors change with the size, but it comes with a foot pump and everything 🙂 There are other brands too, Lauren and Moxie use a Jolly Mega Ball